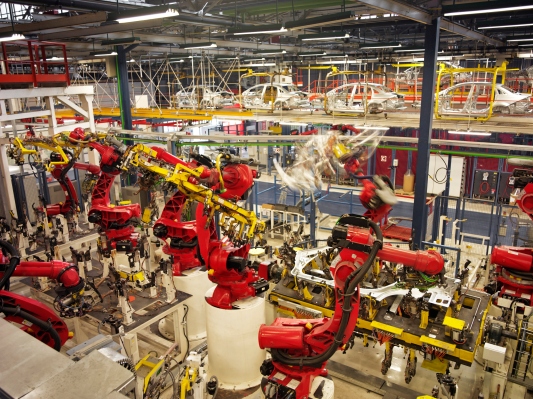 Yesterday we are official announced another big name for TC Sessions: Robotics. I speak with Marty Walsh, the US Secretary of Labor, at the July 21 event. It’s a bit of a curveball during a day focused on discussions with startups, VC and researchers, but it’s something I’ve been looking forward to discussing for a while.

Walsh was appointed to this position by President Biden last March. Before that, he was mayor of Boston for 7 years — it’s a combination of roles that puts him in a unique position to discuss the impact robotics and automation will have on the US workforce in the future.

I expect the people we’ll be speaking to in places like Amazon and the three companies on our fulfillment panel (Locus, Berkshire Gray, and Fetch/Zebra) will generally agree that these technologies will immediately make work easier for workers. while creating more jobs in the long run. However, a question I often ask during these conversations is: what happens to jobs in the meantime?

It is true that there is currently a job crisis. Many companies are struggling to fill positions due to the impact of the past 2 years. As a result, we are experiencing a tidal wave of automation. But what does this mean for the workforce in the long run?

Are we really prepared for the impact all this technology will have on people who don’t have a technical background, for example? Could the government do more in the areas of employment and education? What about older workers who don’t have the time or resources to go back to school and learn to program a robot?

I have a lot of questions, and if you’re reading this, I’m sure you do too. I can’t think of many people in this world I would rather discuss the subject with than Secretary Walsh, given his background in employment; his work in local, state and national law; and his personal connection to one of the world’s largest and most vibrant robotics startup communities. I’ve told a few speakers that he’ll be at the event, and it seems everyone in Boston robotics has met the man at some point.

You can register for the event here for free. You don’t want to miss this one.

A newsletter or two ago we talked about some numbers pointing to how investments in the robotics category continue to grow despite more severe macro VC trends. Here’s some data from the other side of the equation. New figures from the International Federation of Robotics point to impressive sales growth for industrial automation.

Here in North America, sales for the first quarter of 2022 were up 28% year over year. This means that the growth we are seeing is not only future-oriented. This is happening right now.

International robotics markets are currently experiencing a strong recovery: “Global installations of industrial robots in 2021 will even surpass the record year of 2018,” IFR President Milton Guerry said in a release linked to the research. “In North America, first quarter order volumes for both units and sales were all-time high. In all sectors, the post-COVID crisis is driving double-digit growth in the same quarter of last year.”

Focus on the gripper of the robotic arm. Industry 4.0 concept; artificial intelligence in smart factory. Robot picks up the product from the automated car on the production line. Selective focus. Image Credits: Getty Images/rozdemir01

Unsurprisingly, automakers make up a large part of that total figure, at 47%. Auto companies are way, way ahead of the curve here, by a few decades or so. Still, orders in this category continue to grow, up 37% year over year.

In the finance department, FarmWise continues to be one of the more successful agtech robotics companies, both in terms of VC support and viable product. Let’s face it, we could all use a little more weeding in our lives. Earlier this week, the Central California company announced a $45 million Series B led by Fall Line Capital and Middleland Capital. That brings the total to $65 million.

“We started FarmWise with the belief that farmers should get cost-effective, sustainable solutions to feed a growing world, and artificial intelligence is the ideal technology to make this happen,” said co-founder and CEO Sébastien Boyer in a press release. † “With costs rising in the agricultural sector, we continue to expand our technology to work with many more farmers.”

So far, the company’s tech has logged 15,000 commercial hours in the (literal) field. This funding will go towards accelerating the roll-out of existing products and R&D on new technology.

Meanwhile, construction robot company Teleo announced a $12 million Series A. The round was led by UP.Partners and featured K9 Ventures and Trucks Venture Capital, the latter of which led the startup’s starting round. As with FarmWise, the money will go towards deploying existing technology and developing the company’s roadmap. Specifically, Teleo develops technology that converts older heavy machinery into autonomous technology.

“With this Series A financing, we plan to double the hardening and deployment of technology that will enable our customers to operate their existing fleet of heavy equipment semi-autonomously,” said co-founder and CEO Vinay Shet in a press release.

Interesting piece here from Kyle. Interesting, if not particularly surprising, I think. The delivery market is finally coming back to Earth after 2 years of everyone ordering Uber Eats or DoorDash for just about every meal. The bottom line is that the impacts will be very different from company to company, based on specific models.

“DoorDash appears to work by providing fees to all parties to cover operating costs,” Hoxton Ventures partner Rob Kniaz told Vidak For Congress. “The ‘quick commerce’ companies [like Gopuff] competed on price and speed and also have smaller baskets, so it’s much harder for them to break even. I think the model works where you can get away with very high margins and/or delivery costs, but this will never be a run-of-the-mill, cheap model. In my opinion it is a luxury business.”

I mention this in relation to what it will ultimately mean for all the money currently being pumped into delivery robots. Given the sheer number of companies currently operating in that space, it’s probably safe to say there would be a regression either way. But if I were a VC company betting on one of these countless delivery bots, I know I’d be asking some tough questions right now.

The SPAC world has also seen a significant cooling down this year (I’m as nice as I can be, mind) in the wake of some ill-effects for multiple companies going public. At the moment, however, it is not all doom and gloom. Warehouse robot company Symbotic was just officially listed on Nasdaq, courtesy of a SPAC with SVF Investment Corp. 3 (a real creative naming convention there).

Today marks a significant milestone for Symbotic and its employees, and we are excited to accelerate our growth with a truly disruptive technology platform used by some of the world’s largest companies. Symbotic’s long-standing partnership with SoftBank and other incumbent investors will allow us to more quickly scale our business, introduce new technological innovations and expand into new markets.

Have Actuator delivered once a week by clicking here.